During the first UK lockdown, I took part in zoom call 'Self-Hypnosis Meditation' sessions with Jessica Boston and 'She's Lost Control'.
As a prolific daydreamer, I found these sessions to be a really fascinating and innovative way to tune in to my subconscious. It's a way for me to tap into my imagination and use it to visit places in my mind as if I were dreaming, and pull visions back with me that I have been unable to resist painting..!

Last year I visited Dartmoor for the first time. I was struck with how breath-taking the landscape was. The weather seemed unnaturally perfect for spring time, the moors brimmed with an energy that was both mysterious and mischievous at once. The dells and tors were areas of utter peace and presence. If I didn't believe in magic before I visited that place, I certainly wouldn't leave sceptical. 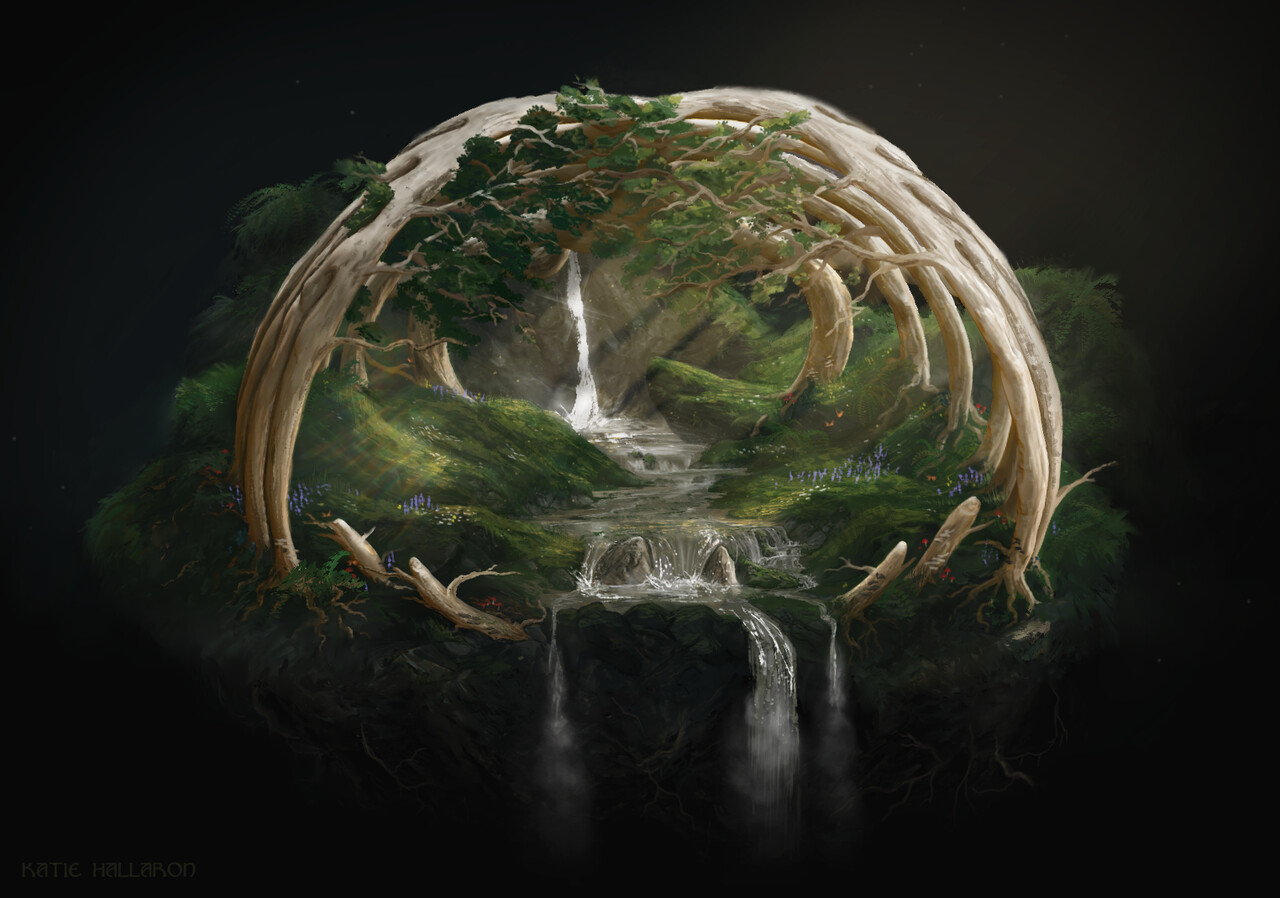 So when I opened my mind's eye during one of my meditation sessions, it is unsurprising to me that the Devon landscape made an appearance.

If our memories and dreams live in the very fibre of our being, and if you allow your mind to drift into the place where you can find rest, safety and contentment, where do you feel it in your physical body?

I look forward to the days 'after lockdown' when I can breathe in new and varied experiences and places, but for now, I'm grateful for these opportunities to engage with my thoughts in the present and still manage to feel 'travelled'!

I highly recommend checking out THIS FEELING IS YOU by Jessica Boston & Desert - for anyone looking for an immersive experience, part music, part hypnosis and meditation. It's available as a digital album (and physical CD if you love flicking through actual booklets like me!

This work is inspired by a story in Women Who Run With The Wolves by Clarissa Pinkola Estés. It's a folk tale about a woman searching for a cure to ease the anger in her husband who has returned from war; "The Crescent Moon Bear'".
I wanted to capture a particular scene in the tale, because it reminds me of the Tarot card; Strength.

In the Rider-Waite Tarot, Strength is pictured as a woman calmly holding open a lion's jaw. It represents the dual aspects of true strength co-existing peacefully; raw emotion and resilience.
Strength can be constructively expressed as endurance, strong-will and determination. If we are to gain some wisdom from the symbolism in this card, it is about developing a calm inner strength, represented by the feminine - and not coercive outward expression which may manifest as rage or aggression, symbolised by the lion. 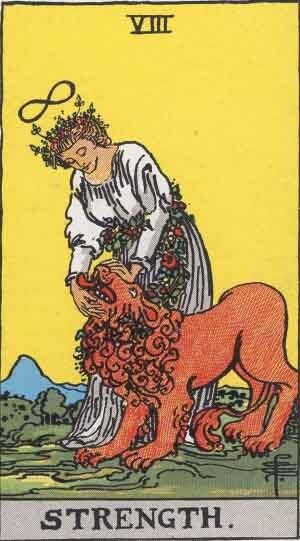 My painting attempts to combine these themes. I have chosen a young girl instead of a woman, and the bear to take the place of the lion.
I think the visual dichotomy of a child facing a huge monstrous crescent moon bear (which in real life are actually very sweet and sadly endangered animals!) is a striking way to visualise this idea of courageously facing our fears and allowing our animalistic tendencies to experience some gentleness.

With this change in mind, here is my retelling of the story (I don't claim any rights to this, the gist of it is lifted from Women Who Run With The Wolves!) :

Once upon a time...
A young girl eagerly awaited the return of her father who had been fighting a war for many years. When her father finally arrived home, he was not the cheerful, caring man she had remembered, and was instead foul-tempered and sulking. He refused to spend time with his family - keeping to himself and exploding in fits of rage when approached. Dismayed, the little girl ran to the healing woman outside of the village.
"My father has been badly injured in the war, he is not the same as before. Can you give me a potion to make him love us again?" The little girl cried.
"Yes, I can do this.. but I am missing an important ingredient. I will need you to go to the Crescent Moon Bear up in the mountains, and bring to me one of his precious silver hairs." the healer assured her. This was a daunting task and many others would have thought it impossible, but the little girl was spurred by love and was determined.

The next morning, the little girl began her ascent up the mountain to where the Crescent Moon Bear lived. As she passed the trees, her hair caught on their boughs, and she grazed her hands and knees as she scrambled up the precipitous rocks. But she called out "Arigato zaishö!" to greet the mountain and thank the spirits. Further up the mountain, the snow blew heavy and cold into her eyes and ears. Still, the girl kept on with her journey and she called out to thank the mountain spirits for her safe passage. Higher and higher, strange dark birds flew out and startled the girl as she climbed. She knew these to be restless spirits, and again she called out "Arigato zaishö, I will lay you to rest!". And the little girl kept climbing, her heart full of love and courage.

When she reached the Crescent Moon Bear's cave, she could hear his deep growls as he slumbered. Mustering up her courage, she took from her pack the food she had prepared and left it near the cave. She ran back to a hollow shelter in the mountain rocks to hide.
The bear awoke and sniffed at the food before snapping it up in one go. The girl left more food at the mouth of the cave again the next day. This went on for three days, each time the girl dared to venture a little closer to the sleeping bear.
On the last day, the bear awoke to his food, and noticed the small girl standing at the entrance to his lair. He roared fiercely and reared back, raising his claws ready to swat the child.

The little girl called out "Please dear Bear, oh please, I have come all this way because I need a cure for my father!". The bear paused.
"I have been feeding you these past nights, could I please have one of the silver hairs from the moon in your fur?"
The bear slumped back in the snow and considered the little girl with large unearthly eyes. With a deep blink, the bear relented and encouraged the child towards him with his great claws. 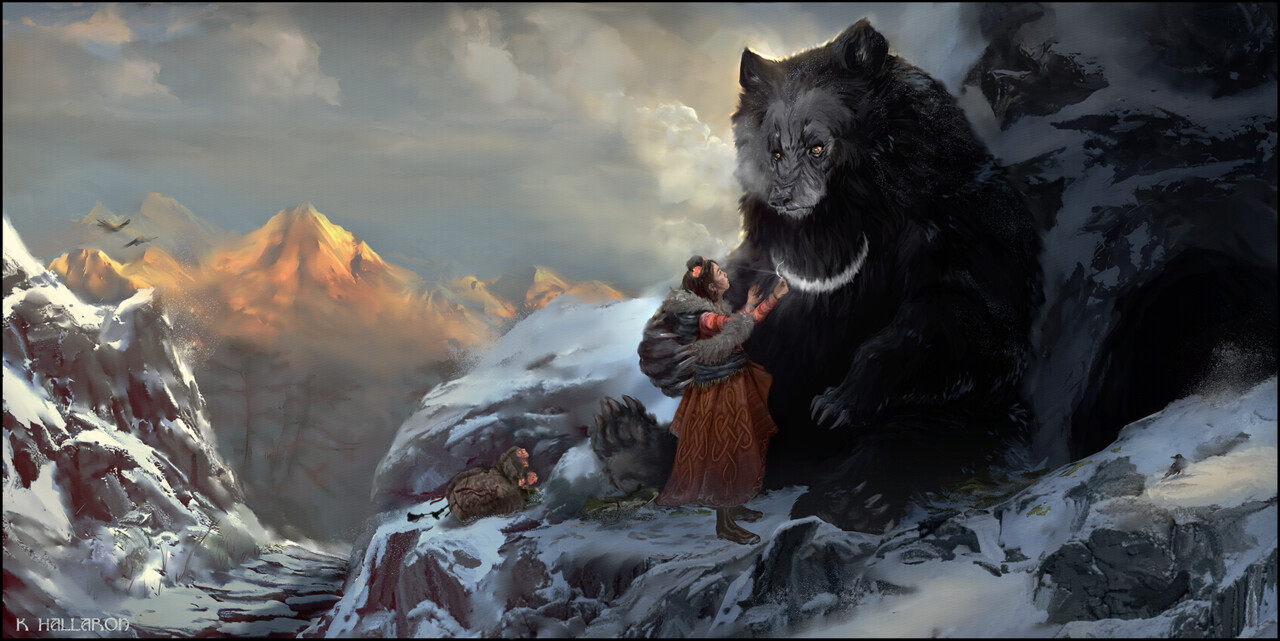 The little girl reached up and pulled a single silver hair from his pelt. The bear snarled and huffed.
"Thank you, Crescent Moon Bear, thank you so much" The little girl bowed. But the bear reached his claws toward her again menacingly. He roared at the little girl and she felt her bones rattle. She turned and fled back down the mountain. As she raced past the scraping rocks and the reaching trees, again she called out "Arigato zaishö!".

At long last, the little girl reached the village and kept running until she found the old healer tending to a fire in her hearth. The little girl thrust the silver hair into the healer's wizened hands. "Ah good" said the healer, peering at the hair and examining it in the light. "Yes, I believe this is a precious hair from the Crescent Moon Bear..."
Then suddenly, she turned and threw the hair into the fire, where it was consumed in flames. The little girl cried out in shock.
"Be calm, all is well" the healer exclaimed. "Remember each step you took to climb the mountain? Remember each step you took to capture the trust of the Crescent Moon Bear? Remember what you saw, what you heard, what you felt?"

The little girl nodded "I remember very well."
The old healer smiled gently "Go now child, go home with this understanding and proceed in the same way with your father."

In the story of The Crescent Moon Bear, we should see the characters as representing many parts of a single psyche. The little girl searching for the cure represents the part of us that acts from innocence and wishes to heal. The angry father is any part of our psyche that has been wounded in some way and holds on to pain.

Her ascent up the mountain can be seen as the challenge of journeying into the unknown territory of our emotions. Forgiving unhealthy thoughts and feelings and putting them to rest is seen in the story through the little girl's interaction with the spirits, and the way she practices patience and compassion in a slow approach towards the bear is how we should approach our feelings of untamed rage. We need to take that knowledge and experience forward with us into our lives; return to the village - and realise that the things learnt along that journey are more important and impactful for our healing than whether we obtained a superficial goal or not, as demonstrated by the instant destruction of the single silver hair.

When I was designing the look for the little girl, I took inspiration from the Japanese roots of the story but I also wanted to throw in some Himalayan and Tibetan influence to tap into a more expansive mythological feeling. The most important aspect for me however was the inclusion of the infinity symbol in her clothes, and red colours to evoke the imagery found in the Strength Tarot card.

At first I overlooked the flowers that the little girl is carrying in her pack and in her hair - it's a part of the Strength card that can be interpreted as tenderness. I had only been thinking about how a little girl would need to wrap up against the elements, but when I decided to include the flowers, it helped to give her a softness, and explains that the pack of food on the ground in the painting belongs to her.

I really love the idea that a girl can be courageous and adventurous without sacrificing her femininity. In fact, the Strength card is telling us we need to keep in touch with our feminine energy, to temper raw emotions and be strong in the full sense of the word.

Hopefully my painting does the same! 🤍 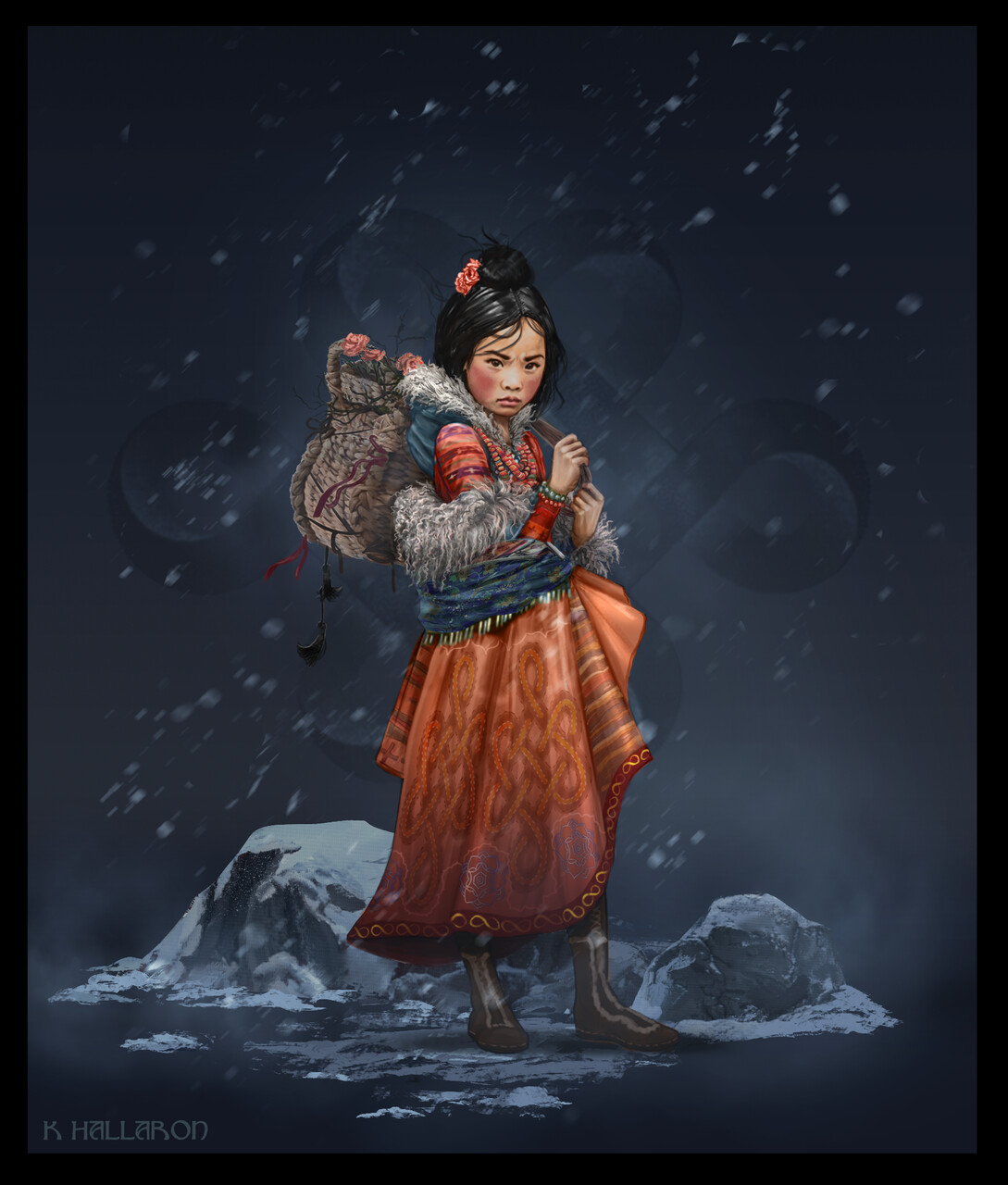